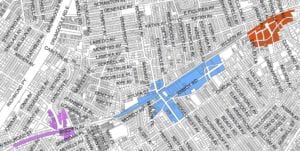 A new South Shore business improvement district was approved by the City Council on Tuesday.

With over 300 businesses in Annadale, Eltingville and Great Kills, the BID will cover the largest geographic area of any other in all five boroughs.

The annual budget for the BID will be $185,000. This will be spent on security for each of the three towns, marketing for businesses there, sanitation services, holiday lighting and events.

While BIDs have traditionally been centered on roads, such as the Forest Avenue BID on the North Shore, the three towns in the South Shore district will be connected by the Staten Island Railway.

This is the first attempt by the city’s Department of Small Business Services to have a single BID managing three separate commercial areas.

The BID will be the third ever in the borough and the second — both on the Island and citywide — approved by Mayor Bill de Blasio. He has 30 days from Council adoption to approve the new BID, established with legislation from Minority Leader Vincent Ignizio (R-South Shore).

De Blasio approved the West Shore Industrial BID in the fall. When the new BID is approved there will be 71 in the city, including one each in the North Shore, Mid-Island and South Shore.