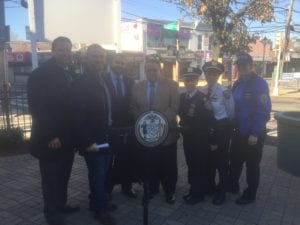 Working jointly with The Staten Island Chamber of Commerce, and funded by Councilman Joe Borelli, the South Shore BID stated that seven security cameras will be installed in Great Kills with the hopes of installing more in the towns of Annadale and Eltingville later on.

“Since the BID’s formation, Great Kills has been a top priority,” said Gary Fleming, president of the South Shore BID. “In fact, we will be installing security cameras in the town within the next few weeks in an effort to stop incidents such as the one this morning.”

Scheduled for installment within the next few weeks, these cameras will share all surveillance footage with local NYPD officials in an effort to reduce crime in the area.

“As low as crime is on the South Shore, this is an area where the NYPD needs to concentrate resources.” said Borelli, a key player in the project’s conception, “The cameras I funded will assist them, and I only wish that we could have had them in place in time to catch this incident, especially since its only a matter of a week or two when they were already scheduled to be installed and live.”

The BID has also created an anonymous tip line to allow local business owners and residents to report any issues or criminal activity — all recorded messages will be shared with the NYPD community liaisons. This system can be reached by dialing (718) 504-0041 Option 2.

The announcement comes in response to the incident that occurred at the Great Kills Train station early Thursday morning.

“Our thoughts and prayers go out to the victim and her family,” said Anthony Rapacciuolo, executive director of the South Shore BID. “The BID is taking steps toward increasing safety within our District and will continue to work with business owners, the community, and the NYPD until Great Kills is no longer a hot spot for these types of occurrences.”